There are 17 copies of The Magna Carta.

Only one is in the US.

David Rubenstein bought it for $21 million.

And donated it to the US. Archives. Anyone can go see it.

“Why the only copy of the Magna Carta in private hands is worth $21 million and why some modern work of art is worth $200 million, I can’t understand,” David said, “but that’s the way the world operates.”

David is the co-founder and co-chairman of The Carlyle Group (the world’s biggest private equity firm). They own hundreds of companies. And have $200 billion in assets.

Every year, you see David on the Forbes billionaire list. And if you go to his website you’ll see 50+ charitable contributions listed.

“I’m now 69 years old, which is the age Ronald Reagan was when he ran against Carter,” he said. “I thought 69 was the age that you’re ready for a nursing home. Now, I think it’s the prime of life.”

David doesn’t look at life as one thing. One period. One life. He breaks it into thirds.

But not everyone gets to live to the third third. So David’s not wasting any time.

“I didn’t start Carlyle until I was 37,” he said. “Maybe people find what they love earlier. I found out later in life.”

“It seems like you did well in the first third, though,” I said.

He went to a good school, worked in the White House, he got to learn directly from Ted Sorensen (JFK’s speechwriter). AND he even got to fly on Airforce One.

“So where was your struggle in the first third?”

I warned him before he could answer.

“And no self-deprecating humor here. I want the truth.”

“My athletic career peaked at age seven or eight,” he said. “At the age of six I thought I could be a professional baseball player. Then my growth stunted. At nine I was ‘short.’ At 10, I was ‘too short.’ So I wasn’t an athlete. I wasn’t first in my class. I wasn’t student body president. I wouldn’t say the most beautiful girls were flocking to go out on dates with me. I wouldn’t say I was a big success. I was a success only in the eyes of two people: my parents. I was an only child. So they thought I was successful, but I knew better.”

“But that’s still not through the first third. That’s the first sixth of your life. Where would you say the struggle was after age six?”

Fast forward. He goes to college, works in the White House. Then Carter loses his second election. And David became unemployable.

Everyone else was getting offers.

David was a lawyer who couldn’t practice law. He had the degree. But no experience. (Reason #5,492 not to go to college).

“I had to lie to my mother. I would say, ‘I have so many offers I don’t know which one to take.’”

“Were you scared at that point?”

“I wasn’t scared. I was embarrassed no one wanted to hire me.”

“I just persevered. I kept going forward and I got lucky.  I stumbled into private equity. I got into the ground floor of an industry that was booming. And it worked out. It took a long time to get there. And when we first started the firm, many people laughed at us because who’s going to build a private equity firm in DC? It’s a government city.”

Nobody took them seriously for years. 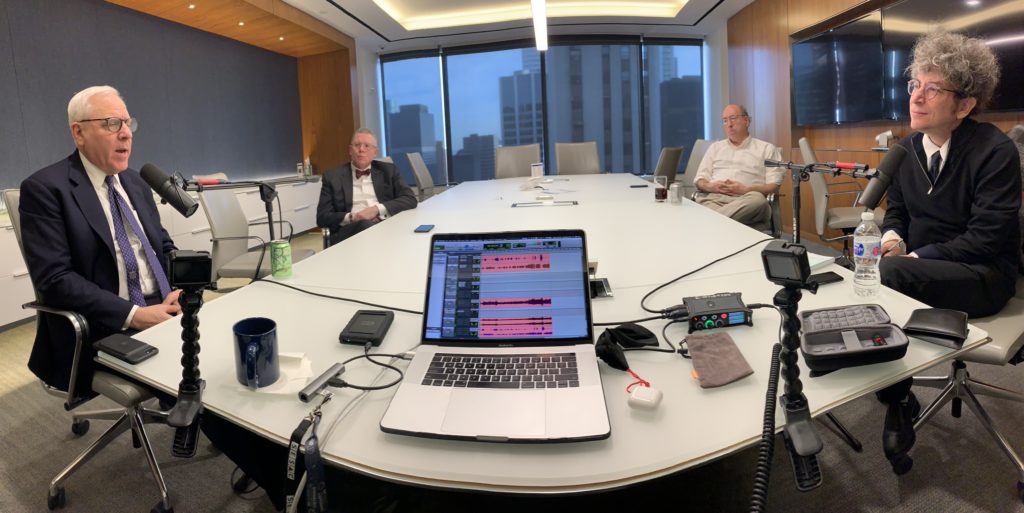 Now he had to build up his firm. Which meant he needed to know how to persuade and motivate CEOs.

“That question is really, in many ways, the most important existential question about life,” David said.

I felt like I just asked the winning question. I was nervous before the interview. Because David has his own interview show. I even told him I was nervous. “What do you ask the person who’s asked everybody everything?” I said.

“And what did you conclude?” he said back.

So then, this happens. I asked the right question.

He listed some reasons:

But he said the best way to motivate people is by getting to know them. So if he knew somebody liked being impressed or wined and dined he’d get his connections from the White House, invite them to lunch, and then invite a potential client, too.

And that strategy worked for the right people.

“When you think about it, all of life is about your ability to persuade someone else to do what you want,” he said.

He told me three ways to persuade people.

“Can I write this down?”

Number 3 is “persuade people by example.”

That’s the most effective. The other two don’t matter as much.

He gave me this example.

“When George Washington was fighting the Revolutionary War, he was the lieutenant general. He didn’t have to mix with the troops that much because he was in charge. He had provisions, he had clothing, he had food. But in Valley Forge in 1777, he stayed with the troops. He could’ve stayed at the Ritz Carlton down the street. But he stayed with his troops. And the troops were in bad shape. A third of them didn’t have enough clothes. Half of them didn’t have shoes… He led by example. This is what persuasion is.”

The more he talked the more I could see his second third and third third blending together.

The second third of David’s life was about building a business.

He persuaded clients to join him. He grew the business. And eventually, people saw it was working.

Then other private equity firms sprung up. And David kept finding new ways to get ahead. He opened an office in Europe. Then in Asia.

No one else was doing this at the time.

Now, he’s taking the work ethic he developed, doubling down, and adding in something new.

“I’m involved in my philanthropy phase,” he said. “I’m doing what I call sprinting to the finish line.”

“What does that mean?”

“I’m trying to get as many things done in the remaining 25%, or whatever it might be, because I don’t want to be on my deathbed saying, ‘Oh, if I had only done that.’ Or ‘Why didn’t I do that?’ I want to get things done now. And that’s why I’m working harder now and longer hours than I did when I was in my 20s.”

He wants to give back.

He didn’t plan this. It just happened.

He went to an art auction. The Magna Carta was there. It resonated with his beliefs.

He gave me a quote from George Santayana who said: “Those who do not learn history are doomed to repeat it.”

I told him my favorite quote on the same subject.

David loves history. He told me why he thinks it’s so important. And now’s he making a meaningful contribution to that.

I think we all want to feel what David is feeling…

And that’s why I like the way David splits up life. Because I don’t have to feel bad today if I don’t know what I love or what to give back to.

I can get a second or third third of life. If I’m lucky.

“It’s rare that somebody will, at a young age, say, ‘This is what I want to do in life’ and it works out. Maybe Willie Mays, Hank Aaron, Mickey Mantle, early on, knew they wanted to be baseball players and it worked out for them, but that’s rare. It takes a while to experiment,” he said. “I thought I wanted to be a lawyer. In the end, I found that what makes me happy is building something from scratch with the help of others, getting the material rewards from that and then giving those material rewards to other people and helping other people.”

Then he told me what he tells college students. But I think it’s good for any age.

“Experiment. You won’t know right away. Try different things. Your parents are wonderful but ignore what they want. My mother wanted me to be a dentist, well-meaning, but I didn’t really want to do that.  You can’t let your parents live your life for you. Try many different things.”

I’m not ready to live my third life. But if tomorrow I woke up and felt like I needed to start over, I’d make a list of the dreams I gave up on. I’d look at what I loved as a child. Then I’d circle the ones I want to bring back into my life.

Then I’d make a second list. I’d take David’s advice, “You can’t let your parents live your life for you.”

And fill in the blank.