Yes! You Should Take Chances with Your Career

Mike Reiss started writing for “The Simpsons” because NO ONE else would take the job.

“I didn’t tell anyone what I was doing,” he said. “It seemed like not only a surefire loser of a show, but actual career poison.”

We all know now how that story went.

The show became the #1 animated series on primetime TV. In fact, it became a cultural phenomenon, inspiring an entirely new genre of television: adult cartoons. Without “The Simpsons” we wouldn’t have “South Park,” “Family Guy,” etc.

“Why’d you take the chance?” I asked.

“I thought it was just a summer job,” he said. “One of my last summer jobs had been filing death certificates at John Hancock insurance and it was like that, it’s like, ‘Well I won’t be doing this forever so let’s just have some fun,’ and that was it. And maybe that’s the secret of the show. We said, ‘No one’s gonna watch it, let’s just make this for us. And let’s fill it with stuff we’d never get to see on TV any other way.’”

Since then, “The Simpsons” has become the longest-running scripted primetime TV series in history. There have been 29 seasons. (the 30th starts in September).

I kept asking Mike to tell me jokes. “I don’t mean to put you on the spot,” I said, “but how would you make X funny?”

I do this to every comedian who comes on my podcast.

But Mike’s not a comedian. He’s a writer. And he made this very clear.

But that didn’t stop me from asking for more jokes.

“I am a comedy writer. Not a comedian. It’s like the difference between phone sex and real sex. One is just a hollow, empty, degrading experience and the other one really runs up your phone bill. In my case, it’s $20 for four minutes either way.”

Mike’s won four Emmys. He’s done writing, producing, showrunning, and now consulting. “I’m very lucky in that I work one day a week at ‘The Simpsons’ now. I live in New York and I still fly to L.A. every Wednesday. I work one day as a consultant. I love to go in there, but the rest of the time, I go, ‘I don’t have to do anything if I don’t want to.’ I’ve worked a long time and I saved my money. So now, anything I do, I do it just ‘cause it tickles me.”

OK. Before I keep quoting Mike’s amazing life as a retiree, I’ll tell you why I think he got to this place. And how you can too.

That’s maybe only 1% true. But luck is a factor.

There are two parts to talent.

Mike knew his ability. He wrote jokes for Johnny Carson, he wrote for the “It’s Garry Shandling’s Show,” and got to be around top talent.

So when he heard that everyone turned down “The Simpsons,” he took it.

3. He pursued his hobby—not money. 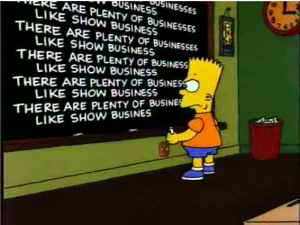 People flooded into the industry because they thought there was money to be made.

“TV just had three networks for years,” Mike said. “And as a result, there weren’t that many sitcom writer jobs. And then, suddenly, it expanded. There were six networks. A lot of people poured into the business who had no business being sitcom writers. They were going because there were job openings. They all moved in on this gold rush and then the business shrank again. Because reality TV came in, and quiz shows like ‘Who Wants To Be A Millionaire.’”

And the first people to get fired were the people who only came for the money.

“It wasn’t what they were born to do. It wasn’t their passion. It was just a job to them. The people who stayed and kept working in TV—this is what we were born for. There’s something terribly wrong with us that we just make jokes all the time and we’re not good for anything else whatsoever.”

4. He focused on fun—not ratings.

They were the lowest-ranked show on TV. They could’ve focused on ratings and trying to impress the execs upstairs so they didn’t get cancelled.

But that’s not what they did.

They wrote just to make themselves laugh.

Mike walked me through the process.

“It’s a bunch of writers sitting around a table. We have a script. Some poor soul has to write the original script and then we go, ‘Alright, line one. Anyone got anything funnier?’ And everyone pitches jokes. If something makes 60% of us laugh, it goes in the script. Then we go line two, line three…”

“I remember once, we needed a line, what does Homer say when he picks up the phone? And I was just sitting there for two hours and I’m like, ‘He says hello… does everything have to be funny?”

They landed on “Yellow.”

“That was good enough.”

If he didn’t like the process of going line by line, then he wouldn’t have made it to 29 seasons. It’s the reason he gets to do what he wants today.

Now Mike writes plays. “There’s no pay, so I must enjoy it,” he said.

He also just came out with a memoir called “Springfield Confidential: Jokes, Secrets, and Outright Lies from a Lifetime Writing for The Simpsons.” He’s written a children’s book and he has a second one coming out soon.

Mike focuses on process. Not outcome. That’s what he did at “The Simpsons” and it’s what he still does today.

5. He doesn’t think he knows all the answers.

Mike had to write 60 jokes a day for Johnny Carson.

“There was no guarantee he’d pick the good ones,” Mike said.

The writers generated 300 jokes a day. Then the head writer narrowed it down to 18. And Johnny Carson would pick 12.

“Four of them would bomb every night. I bet there were better jokes, but that wasn’t my job. My job was to crank ‘em out.”

There’s a joke Johnny told once that Mike wrote. He says it was terrible. “I laughed when I read it in the book,” I said.

It was joke about Mikhail Gorbachev (a Soviet Union leader).

“The joke, which I won’t even bother to explain for young people who won’t get it, was ‘Red Square.’ And the answer was, ‘What do you call that bloch on Gorbachev’s head?”

The joke made it on Johnny Carson’s list one night.

“He does the joke. And it doesn’t just bomb. They just had no idea it was a joke. They were sitting there still waiting for the punchline.”

Six months later, the joke gets back onto Carson’s list. This never happens. But he retells the joke.

Mike thought he was doomed.

“He does the joke and it killed. He got this giant laugh and it was a moment I’ll never forget where I just go, ‘There’s no science to this.’”

And maybe that’s the truth about any creation or endeavor or business. Formulas kill creativity. You can’t look at the past to design the future.

Not once did Mike tell me about some master plan he had to get ahead.

He was only focused on one thing: a single laugh.

Springfield Confidential: Jokes, Secrets, and Outright Lies from a Lifetime Writing for The Simpsonsby Mike Reiss

My interview with Nancy Cartwright (the voice of Bart Simpson)

The Tonight Show with Johnny Carson

Not Necessarily the News

Chico and The Man

Mark Twain quote “If I had more time, I would have written a shorter letter”

My interview with Nell Scovell

All In The Family

Who Wants to Be a Millionaire

Sick in the Head: Conversations About Life and Comedyby Judd Apatow

Even This I Get to Experienceby Norman Lear

I write about all my podcasts! Check out the full post and learn what I learned at jamesaltucher.com/podcast.

Thanks so much for listening! If you like this episode, please subscribe to “The James Altucher Show” and rate and review wherever you get your podcasts: