The Only Way To Out-Innovate Innovation... Stop Doing Nothing!

Hate was pouring in.

I’d tell a reporter, “Repeat after me.”

They’d repeat after me. They’d say the facts out loud. Then the article would come out. And it would say the complete opposite.

I gave out my phone number.

I answered calls until 3 in the morning. And I’d give complete strangers from Twitter the chance to tell me why they hate me. Then I’d explain my side.

And they all understood.

I told this to Phillip Stutts when he came on my podcast. He has been at the forefront of defining digital campaigning in politics. He has gotten presidents elected. He’s gotten senators elected. He’s gotten all sorts of political officers elected. I wanted to hear the strategy behind those wins. And how it can be applied to business.

But I also wanted to ask Phillip about his rare, incurable disease.

I’ll get back to that.

First I’ll tell you Phillip’s advice to me.

Respond to the criticism. Be fast. And proactive.

“Because people are just wired to go nuts over everything,” he said.

I didn’t respond. I was hoping it’d just go away. But the articles kept coming.

“This “Crypto-Genius” Tried to Debate Bitcoin. It Wasn’t Pretty.”

“Who the Hell Is This ‘Crypto-Genius?’”

I’m afraid of being hated. Especially when I know I have good intentions.

And that’s Phillip’s point. He gave me a lot more strategies I could’ve used. And they all revolved around two main ideas:

He wrote about this in his book, “Fire Them Now: The 7 Lies Digital Marketers Sell. And the Truth about Political Strategies that Help Businesses Win.”

He describes the future.

He shows you the 2nd and 3rd level consequences.

For example: what will happen to insurance agencies?

And what will happen to the builders and manufacturers?

And the craziest one… if self-driving cars reduce the number of car accidents, what will happen to people waiting for organs?

Go with it in health. In business. In your personal life. At work.

“If someone’s going to try to disrupt you or out innovate you or run a comparative ad or hit you with a negative response, somewhere along the lines with your business, you have to address these things,” Phillip said.

If Facebook has the data you need to understand your customer, study it.

If running a negative ad about your competition helps you grow, do it.

Steve Jobs did it. 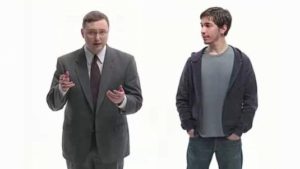 Apple had 2% of the laptop market at the time.

“He was so honed in on trying to punch up because, at that time, the iPhone was just about to come out.”

The ads ran. And The iPhone came out. “Those two things coming together blew up that company in a way that had not been seen before.”

We see this over and over again. But in new ways.

Pepsi created “The Pepsi Challenge.” Coke hit back with “New Coke.” They responded to the negative ads with a new product.

Reacting to newness is innovation.

I’ll give you a more meaningful example.

Phillip has an incurable disease.

He had all these surgeries, took all this medicine, and nothing worked. The doctors told him the next step…

He told the doctors, “I don’t accept that.”

He changed his diet. And got off his meds.

Then he wrote an article in Inc Magazine with a crazy goal.

“I’m going to find the cure within 5 years.”

Someone at Johns Hopkins read the article. And Phillip has been working with them ever since.

They’re about to start a clinical trial.

“At the ripe old age of 40, I had the chance to change my life,” Phillip said.

He had no experience in medicine. He just felt inspired to stop doing nothing.

“Why did you do nothing for so long?” I asked. “Was it magical thinking?”

“I didn’t want to deal with it,” he said. “And the second part was that I was being treated at the Mayo Clinic.”

He outsourced the problem. He thought they were innovating. And finding the cure. And going to help him.

He had to do it himself.

He had to be the innovator.

He had to take the tactics he told his winning politicians and the corporations who asked him for help, and turn it around on himself.

And that’s what he did.

He switched from passive to active.

Then he gave himself a goal. And a timeline. Which is exactly what he was doing for his clients all these years.

“The disease made me realize that I have to constantly grow.”

He already knew the importance of change.

But now he knew to apply it to himself.

Phillip had two choices: take action. Or live with a feeding tube.

A year ago, I chose the feeding tube. I let the criticism take over. And it altered my ability to feel good and healthy at the time. Stress is a killer.

It’s not easy to do what Phillip did. He even said he did nothing for a while.

So maybe that’s step 1… Realize if you’re doing nothing.

And go from there.

Thanks so much for listening! If you like this episode, please subscribe to “The James Altucher Show” and rate and review wherever you get your podcasts: