What I Learned From The Best Networker In The World

I’m sorry I ruined his life. Completely destroyed it.

He had a successful career, was the top TV news producer in NYC.

Then he quit all of that to become the producer of my podcast.

I wanted to really step it up. Do more episodes, have better guests, really establish myself as the premier podcast about achieving peak performance.

He brought on all of my dream guests, everyone form Kareem Abdul Jabbar to Tiffany Haddish to Paul Reiser to Tyra Banks, Tony Rock, Ray Dalio, to the upcoming Ken Langone and many many more.

One time I said , “my dream guest would be XYZ.”

He pulled out his phone, dialed a phone number from memory and handed me the phone.

Somehow he has a close network of 10,000 people that he keeps in close contact with.

He was going places. And then I ruined it for him.

He was a producer for Good Day NY, the top rated morning news show in NYC.

An article had just come out about me in the New York Times about how I threw out all of my belongings. Steve wrote me an email and asked if I could come on the morning show.

I didn’t really want to.

But Steve had done his research. He knew I had a daughter. He told me Laurie Hernandez, who had just won the Gold in gymnastics in the Olympics, was going to be on the show and I should bring my daughter.

So I did. I brought her and we took their picture. My daughter was beyond thrilled. [See image].

Steve does his research. Knows how to overpromise and over deliver so you can’t say “no” to him.

A year later I was hanging out with Ryan Holiday to celebrate the release of his book, “Perennial Seller”. We had just had breakfast and he told me he was going on Good Day NY.

I said, “I’ll go there with you just to keep you company.”

We went there and the bestselling author Brad Thor was there. He said to Ryan Holiday, “I’m a huge fan.”

Steve was there. He said to me afterwards “You were just supporting your friend and not trying to promote anything. Nobody ever does that anymore.”

I said to Steve, “Why don’t you quit this TV stuff and join my podcast. I probably get more downloads per episode than this TV show gets viewers every day.”

I had many people I was considering for the role of producer of my podcast.

But I liked how Steve had created that experience for my daughter as a way of getting me on his show a year earlier.

I liked how Steve was constantly introducing people to each other. He had introduced Ryan to Brad Thor, for instance.

People often don’t know what “networking” really is. Networking is not the list of people you know that you simply get in touch with when you need them.

Nor is it possible to stay in touch every day with the people in your network. Then you would be busy all day long writing emails to people just to “stay in touch”.

Networking is when you can introduce one person to another when you think value will be created.

The more value you create between the members of your network, the more powerful you will become.

Steve was the master of this.

The key to this is humility. You never hold out your hand and say, “Hey, I was in the middle. I need something.”

This is a symptom of scarcity. Always be abundant. Always give your connections, your ideas, your generosity and it will be returned 1000x.

If someone dies in your family, he doesn’t just put a sad face on a Facebook post. He goes to the funeral.

If someone needs a job he doesn’t just say ideas, he makes 50 introductions.

Always over deliver to each person in your network. Steve knows with his network he can go anywhere, do anything.

I should mention…there is something mentally wrong with Steve.

First off, I think I disappoint him every day.

He says, “How about XYZ for the podcast? They just won a Nobel Prize and a Grammy and they were Secretary of State” or something like that and if I’m not interested I say, “No”.

When I first started doing my podcast I would send out three emails a day to try and get guests.

He also knows how to connect the dots. “If we put on AC then we get access to their publicist, PT, who knows ZY, and AB, which gets you to your dream guest of FG.”

Every night he says, “Come to this private screening. This way we show support and <Famous Director> will be answering questions afterwards and we can go backstage and ask him to go on the podcast.”

We’ve done this dozens of times.

But often I can’t at night. So I say “No” again but Steve goes. And he adds to his Contacts list every time.

If he could, Steve would want me to do 5 podcasts a week. Instead, I’m about to move to two.

My goal in a podcast is to be so prepared that the guest feels like he or she is in a therapy session. I want to know more about the guest than the guest knows about themselves.

So the math wasn’t adding up. So I disappointed Steve again.

But we’re getting the job done. The podcast has gotten better. Plus I’m about to start YouTube channels (Steve, me and Bill Beteet do a post-game video analyzing most of the podcasts).

So I hope I don’t disappoint him too much.

But I sometimes wonder (and I asked him in the podcast): is he a freak of nature?

I wanted to have Steve on my podcast so I can learn from all his mutant powers.

But there’s one super power he has I’ve never seen before:

Steve remembers every quote from every movie and article he’s ever read.

And he speaks only in quotes.

In our 60 minute podcast he quoted people 55 times.

He doesn’t forget a single line from any movie, article, book, discussion, etc.

And why not speak only in quotes? Things become quotable when they are wise.

One time we were at someone else’s podcast. Dante Nero’s. Steve couldn’t stop quoting people.

Here’s the 55 quotes he used in our 60 minute podcast:

“Those who mind don’t matter and those who matter don’t mind” – attributed to Dr. Seuss and FDR presidential advisor Bernard Baruch

“There’s no right way to do the wrong thing” – Unknown.

“If you don’t ask, the answer’s always no” – Pat Croce

“I can play the music, but I can’t make everybody dance.”

“I like to read the actual papers because you see stuff you’re not looking for. “ Mayor Bloomberg

“Be more concerned with your character than what you’re doing.” – John Wooden

“The gum was losing its flavor.” – Steve Cohen (original)

He said this in response to when I asked, “Why did you want to get into TV?”

Steve talking about why he keeps up with people

Steve referenced this quote when he did air quotes. It’s important to always be skeptical of our leaders.

And then Steve says, “Which isn’t meant to be a diss to the author of ‘Reinvent Yourself’”

“What’s the world’s largest microphone? A telephone.” – Steve says this is “an old saying”. But pick up the phone and call people.

“The slightest good deed is better than the greatest intentions.” – John Wooden (basketball coach who Steve says is a great influence on him)

“Do it anyway.” – Mother Teresa

Matt Lauer once said he got 6 Christmas cards when he worked in local TV and the next year he got 200.

“You don’t just want something read, you want it spread.” – Unknown. The difference between a good podcast and a viral podcast.

“Something remarkable is just that. It’s Re- Mark-able.” – Seth Godin. (How to get something spread).

“There’s a difference between excellent and remarkable.” – Seth Godin?

“The details separate the good from the great.” – Unknown/Steve Cohen (original)

“There’s no right way to do the wrong thing.” – LA County Jail quote in a documentary about the bloods and the crips

“Never let a temporary inconvenience get in the way of permanent improvement.” – Unknown.

“I really enjoy when people stop me and they say I’ve helped them and I really inspired them.” – James Altucher

Steve remembering when he met me

“There’s no such thing as a slow newsday only lazy reporters.” – Steve Cohen (original)

“You have to make what’s important interesting.” – Steve Cohen (original)

“How do you get people to a party? Invite them early. Invite them often. Be a good host.” – Steve Cohen (original)

“Those who know you best should love you most.” Steve Cohen (original ?)

“Champions do everyday what losers do only occasionally” – Mike Tyson

“Everyone’s got a plan until you get punched in the face.” – Mike Tyson

“Successful people focus on the flowers and not the weeds.” – Denis Waitley, author of The Psychology of Winning

“You got to get along to go along.” & “Persistence beats resistance”

Talking about dealing with hostility at work 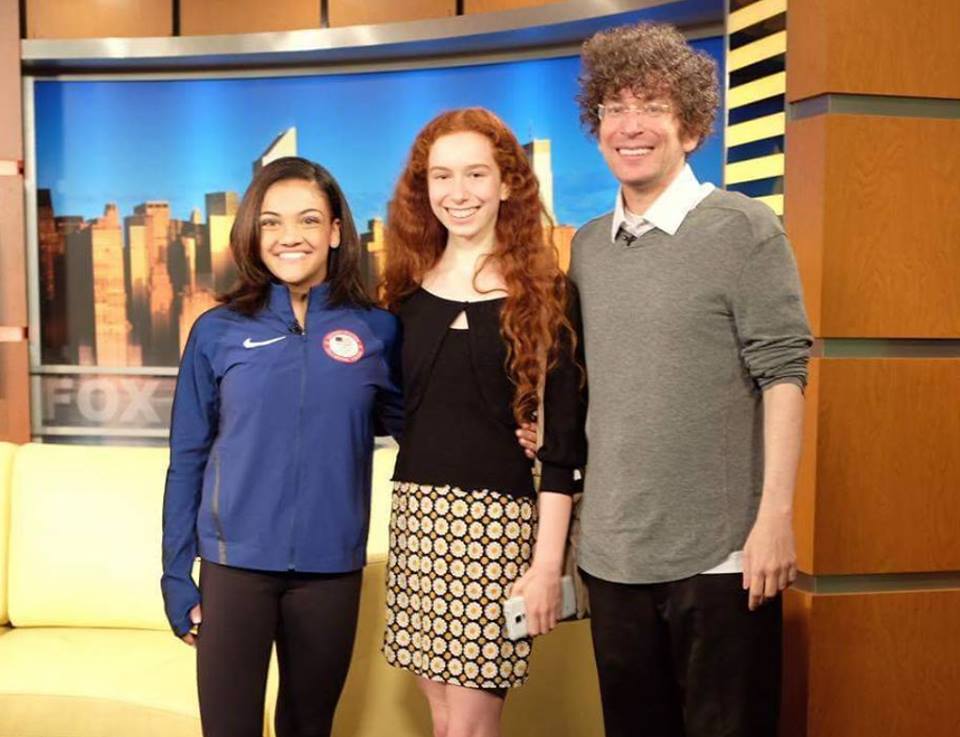 [Image: Laurie Hernandez and my daughter on Good Day NY]

P.S. what’s your favorite quote of the above. ?

P.P.S. What peak performance guests should Steve go for?