The Earth Will Be Destroyed, Humans!

I get scared and look at them, thinking maybe jamesaltucher.com is about to expire or something that I would probably be feel bad about.

What was I thinking? Why did I register that domain name? I have no memory of this at all. Maybe 23andMe is right and I’m going to get Alzheimers.

Then I go to the next one: PLANETDESTRUCTION.COM.

Who was this James? Where did he come from? And will he be upset at me if I let his domain names expire?

What would it matter to him anyway? If the world was going to be destroyed did he really expect these domain names to live long enough to expire?

If I track down this James would he run away from me. Would he be wearing a hoodie? Would I have to tackle him. I’m 45 years old! He’s probably younger than me, like maybe 40. Maybe he could run faster than me so I would have to surprise him. Maybe punch him or something. I haven’t punched anyone since I was 11. “You’re a dick!” I would yell at him. “No,” he would say, “YOU’RE a dick!” And we’d go back and forth like that for awhie. Me and PastJames.

“Why did you register EARTHDESTROYED.COM?” I would ask him. But then he would run away again. And I would not be able to catch him this time. It turns out he’s really from outer space and he can take it up a notch and run super fast. Like ten miles per hour. Or some speed that I would never be able to match.

What were you thinking, James?

Am I getting older? I honestly can’t remember registering these domain names. I go to them. What if these were now huge sites, with aliens from various planets posting in the message boards all about the Earth’s destruction and PastJames answering everyone’s concerned questions. Or maybe supplying scientific details about where all the rare earth minerals were.

Ok, no content there. GoDaddy is gracious enough to “park” my domain there. Now they are getting set to tow the domain. It’s parked there for too long without the Earth being destroyed. (Danical Patrick is parking my domain)

PastJames, what have you done? EARTHDESTRUCTION is set to expire June 7, 2013. Is this the end of the Mayan Calendar or something? Did Past James calculate out some meteor trajectory for that day or the day before? Has the meteor already missed? Has nuclear war already been averted so there’s no longer need for that domain?

A) Our worst fears don’t come true. Every day the news wants us to believe the world is at an end. It never is. But media makes billions off of that fear. Which is why I never read the news.

B) Even if they do come true, what does it matter? If the Earth was already destroyed I probably wouldn’t care now. So might as well go to a movie today.

C) I probably thought there would be some way to make money off of people’s fears, is my guess. That’s the way Past James operated. What a character!

Everyone always wants to know what they can do to bring about “real social change” in the world. I put it in quotes because I am asked that all the time. That exact phrase. The best way to be “social” is to improve yourself on the inside. Then you help the people around you. Then they help the people around them. And so on. A tiny change on the inside, a big change throughout the rest of the world. That’s the best answer.

D) It’s quite possible my body was taken over by an alien who then registered some domain names, had some kids, lost all my money a couple of times, got divorced, and then said, “uh oh, I totally fucked up” and left to go into another body. That happens sometimes. Well, here I am. It all worked out for the best, though. Except for this PLANETDESTRUCTION.COM thing.

E) I wonder if Past James had an escape plan. He must’ve, right? Maybe there’s a staircase in my basement that takes me into the future of another dimension.

No I don’t know. That seems weird.

My 10 year old just woke up and I’m disappointed. It means my writing time today is quickly coming to an end. She’s upset. She says, “I couldn’t sleep but I was just lying in bed.”

What? What the fuck do I know? Who just said that? I vaguely remember my dad saying something like that to me and now I just repeated it to her and now she will probably repeat that to her daughter 35 years from now. We keep passing on to our kids all this bullshit. Go to college. Get a job. America sometimes fights “the good fight”. Lying in bed is just as good as sleeping.

Somehow I’ve become a container of bullshit. First I’m registering domain names, literally, like there’s no tomorrow. Then I’m spewing out my baloney to my ten year old. I’m not trying to lie to her. But think of al the times you open your mouth to say things you have no clue about. I do it all day long.

Like, “I bet the weather will be good this week because it was bad this weekend.” Or, “Israel should’ve been put in Montana to begin with. Then the Muslims wouldn’t hate the Jews so much.” Or, “Take Advil for that headache because it’s probably an inflammation in your brain that’s causing it.”

All day long. It’s just spewing filth out of my mouth. Puke.

Maybe that’s a clue to my escape plan. The Earth would get destroyed, I would find a Latina (Claudia?), and then I would fly away to my home. In that beautiful spiral galaxy. The one with the forever buried inside of it. 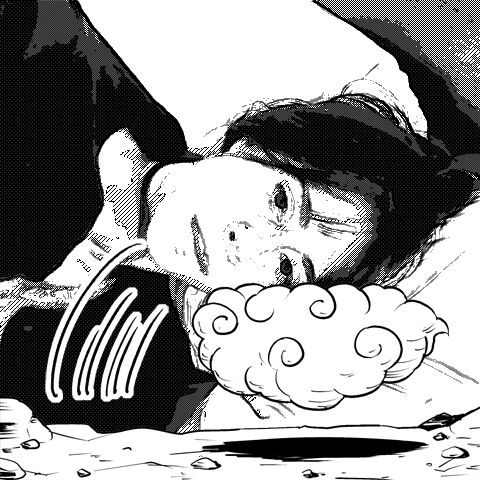 (Claudia made a manga of herself. My Latina wing?)